This is just a bunch of random pictures that aren't really related in any story, but wanted to post them anyway....enjoy. 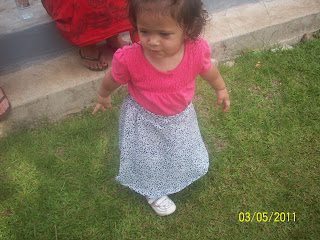 Above: I asked Kuso's mom if she could sew a puletasi (Samoan dress) for Leila before we left. I even told her to make it a little big so she could grow into it next year because we had already bought a dress that should fit her this summer. Well, this is what she came up with. She just looked at her, pulled this old material out, and sewed it. She is so talented. I watched her in the past sew three puletasies for Kuso's nieces in the morning before we were going to leave. She also sewed another skirt that is orange with purple flowers that is a little bigger that will fit her later on.
Below: Leila LOVES to be thrown in the air...and I have been around on several different occasions when Kuso's high tosses have caused other people to gasp. He does throw her quite high, but she loves every second of it. This is on her way down...she was just slightly higher than this. 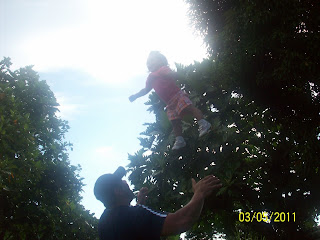 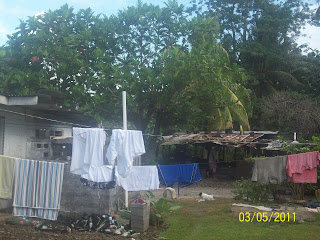 Above: Just a shot of the side yard at Kuso's house. This is the laundry system. In the back (that old shack looking thing) is where they do a lot of the big cooking. Just behind the red/pink shirt is where the outdoor shower is. This is a common look among all of the houses in Samoa.

Below: This little girl wanted to see the "palagi" girl. So her mom brought her to see Leila. I don't think she was too impressed since their hair and eyes are the same color...Leila is just slightly lighter skinned. I thinks he was more impressed with me with my white skin, lighter hair, and lighter eyes. 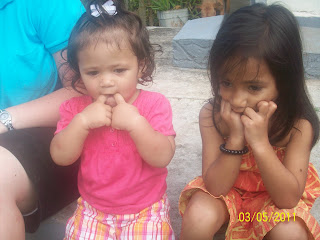 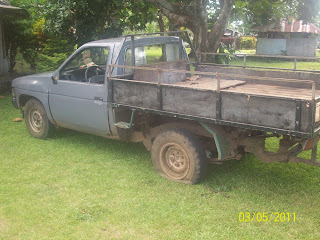 Above: Atonio's old truck that gets him to the plantation (when it doesn't have a flat tire.) There were tires for this truck in the box that got stuck with all of our stuff in it.
Below: Down the street (across the corner from where we rented our car - $100 tala per day = $130 US dollars for 3 days...not too bad) is where Kuso's good friends lived. Kuso said, "Let me take a picture of this...that is where Josh and Burton lived." I think sometimes he is starting to think like a blogger. :) I think it was more to show them this store that has been built on the corner. And since their wives look at this blog, here it is.

Krissy's is the name of the store. I didn't go inside, but in every other market, they have Krissy brand snacks (chips, corn puffs, etc.) YUM. Very crispy and good flavor. 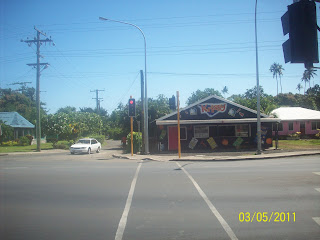