Every year, the USA hosts a Rugby Tournament in San Diego. It is called the 7's because there are only 7 players on each team. Each half is only 7 minutes with about a 2 minute half time. So an entire game lasts about 20 minutes.

Last year Kuso went with his friends and family to the tournament in San Diego. He was planning on going this year, but due to his surgeries, he decided it would be better for him to stay here. He was really upset that he would miss it, but was just planning on getting updates from his friends who went.

Our friends, Burton and Leslie, found it on Pay Per View. Needless to say, all Saturday (Valentine's Day...how much do I love my hubby...) and Sunday was spent watching rugby. It was fun. It was fun because the games are so quick and because I actually got to WATCH WITH my hubby rather than WATCH HIM play. So I got to ask a lot of questions. I had a basic understanding of the game prior to this weekend, but I now understand much more.

I'm glad we were able to spend the weekend watching rugby. It was fun to see Kuso get excited over the games. It actually made me excited for the season to start this spring/summer. Now that I understand the game better, I might make a better cheerleader!!!
Posted by Lisa & Aukuso No comments: 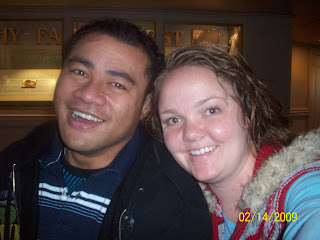 This year is the first time I have ever really celebrated Valentine's Day. I never had serious boyfriends growing up. The first year Kuso and I were together, he was in Samoa (and had never heard of Valentine's Day.) Last year, Kuso was out of town working and "didn't celebrate that holiday." This year, the love bug must have bitten him. He has been planning the festivities for several weeks.

In the morning, we went to JB's downtown and had breakfast with Pasami, Kesa, their 2 boys, and Nimo and Apelu. After breakfast we went to see the Joseph Smith movie. This picture of the temple was taken from the car. It just looked cool with the cold snow look and the steam coming off the water fall. 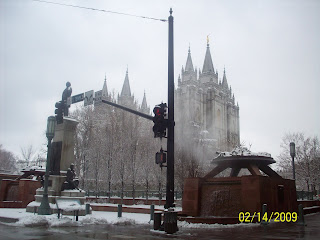 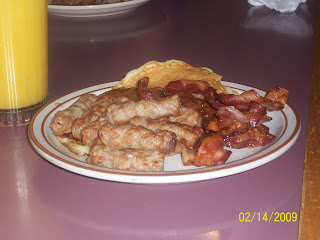 This is just one of the plates one of the boys filled at the breakfast buffet.
Check out all the MEAT!!!
When we got home, I walked in the door and these beautiful roses were waiting on the table for me. I later found out that he had hid his key under the door mat, the delivery man opened the door, left the flowers, then locked up and left the key. (Good thing that didn't go bad....)
It was such a wonderful surprise! They are gorgeous to look at and smell even better! As I was smelling them, Kuso pulled out a card. This surprised me because he is not "into" cards. The card was so sweet and fit our relationship perfectly. Then he wrote some of the sweetest things. Okay....I admit it. I cried. Any of you who know me, know that I don't cry over hardly anything, so for flowers and a card to make me cry, it was GOOD. The card had some money for me to buy new clothes.
I gave him a few things including a shirt and a carrying case for his portable DVD player... Romantic...I know. It was a fun day. I've never really been IN to Valentine's, but if it is going to be this great every year, maybe I'll GET into Valentines. 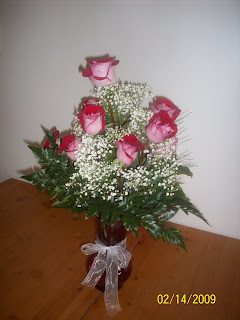 At the risk of being sappy, I love my husband.
I couldn't imagine anyone more perfect for me to spend the rest of my life with.

So Kuso had surgery on his ear on January 23rd...On February 7th, he woke up with pain in his stomach. He took some pepto and went back to sleep. A few hours later I asked him if he was going to play his basketball game. He said his stomach hurt too much....Now any of you who know Kuso and how much his sports mean to him, for him to miss a game, it is a big deal. I asked him if it hurt bad enough for him to see a doctor and he said "Yes." Again, any of you who know him, he doesn't exactly enjoy going to the doctor just for fun.

We were headed to the emergency room for a problem I was having (that needs not to be talked about since it ended up to be nothing....) Anyway, while they were checking me in, Kuso's stomach was hurting even more. I asked them if they could check him while we were there so we didn't have to go see another doctor when we left. They checked us both in. After all my tests came back with everything being okay, it was determined that Kuso had appendicitis. They were going to take his appendix out later that afternoon.

So just 2 weeks and 1 day later, Kuso was going back under for another surgery. He took the medication better this time around. He stayed the night in the hospital. Recovery for this surgery was much more tolerable. We meet with the doctor in a couple days and are hoping he can have a release to go back to work.

Due to all the surgeries, Kuso hasn't worked in nearly 4 weeks. It's been a little tight financially, but it's been good for us to spend some good time together without him being out of town.

Just before Kuso went in to surgery, he "promised" that this was the last time anything like this would happen. (Not that he can control it.) But hopefully, his promise will hold true....at least for a LONG while!
Posted by Lisa & Aukuso No comments:

On January 23rd, Kuso had surgery on his right ear. There was a "big hole" in his ear drum, likely from when he was young and swimming in the ocean so much. Last summer he get some water deep inside and it was bugging him. We went to get it checked and that's when the hole was found. After several months of using ear drops and just "waiting to see if it would heal itself" it was determined that surgery would be the best option.

The doctor took a graph from behind his right ear to create the patch that was put over his ear drum. The doctor cut the back of the ear close to the bottom open to have better access to the ear drum. The surgery took about 3 hours.

This was Kuso's first experience with being put under. It took him several hours to come out of it enough to come home. He woke up hungry which is quite unusual. A few hours later, he ate. Later that night, the combination of medication, pain, and food did not mix well.

Kuso was extremely dizzy for the entire next week. Regardless of whether he sat, stood, walked, slept, whatever, he was dizzy. Needless to say, it was a miserable week for both of us. The next week proved to be a little better. We met with the doctor on February 16th and the "go ahead" was given for him to return to work.