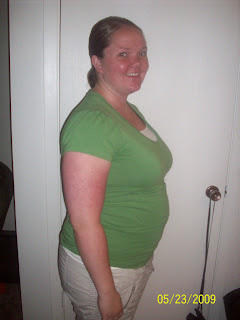 Here it is. The first of several sideways-showing-off-my-roundness pictures. Wish I could blame the chubby face on being prego...no such luck. It's a permanent fixture. :) This was taken on Saturday, which is the "official" 24 week mark. Kuso was out while I took a shower and got ready. When he came home, he said, "Hon...I really like that shirt." (it's not like him to comment on something so simple.) He continued with "It shows your stomach. I like that. I've been waiting to see that." How cute is he? Forget the guys that worry about their ladies getting big. HE LOVES IT!!! Which makes me LOVE IT! After he took this picture, I looked at it and said "wow...fatty bo-batty." He smiled at me and said "I know. I like it."

I also decided it was appropriate to finally post a picture because of a comment I had received earlier in the week. My work partner and I were out checking on kids at home. I used to work with a boy who lived at one particular home, and my partner now has his cousin. Their older female cousin is kind of like a guardian since the mom doesn't speak English well. So she has known me for years. Anyway, we meet with the 15 year old boy on the porch and go back to get in the car. The older cousin comes running out "Lisa! Are you pregnant?" I laughed and told her I was. She was SO excited. She said "yeah, he came inside and said I think Lisa is having a baby. I asked him why he said that and he said because she's not skinny anymore." So I took that as one of the most positive things for two reasons. 1) I guess I look more prego than fat now (even to a 15 year old boy who doesn't know me well) and 2) at some point, they thought I was skinny!
Posted by Lisa & Aukuso 6 comments:

Yep...we made it to our 2 year mark, which means we are no longer newlyweds! As most of you can relate, in looking back over the past 2 years, sometimes it seems like the time flew past and other times it seems like we've been through so much that there is no way it only took 2 years for it all to happen! One thing is for sure, as time passes, our love, appreciation, and understanding of each other definitely grows.

As mentioned in my birthday blog, Kuso is in Wyoming working. Yep...every year I'll get to go to Wyoming to celebrate my birthday and anniversary. So I headed up after work on Friday (the day OF my birthday.) It works out well that by the time I get off work, go to the bank and fill up the car, I get to the hotel about the same time he gets back to his room. This weekend did not work out that way.

I'm cruising along I-80 eastbound (well, not cruising as my cruise control is broken which is vital information for this story.) I look in my rear view and see the red and blues. Crap. I pull to the side HOPING he would pass me. No such luck...he pulls right up behind me.
Cop: "Do you know how fast you were going?"
Me: "Nope." (I know....stupid answer.)
Cop: "Where you headed?"
Me: "Rock Springs."
Cop: "What takes you there?"
Me: "My husband works out of town so I'm going to visit him for my birthday." (Bonus! I got to throw in that my husband is out of town AND it's my birthday...he should feel bad for me right?)
Cop proceeds to take my license, insurance, and registration and comes back.

WITH A TICKET! Apparently I was going 88 in a 75. Well, when you are driving through the straights of Wyoming with broken cruise control and the only other vehicles on the road are semis, it's hard to gauge how fast you are really going without staring at your speedometer... which if you did, your eyes wouldn't be on the road. I wasn't darting in and out of traffic to get around people...I was just driving in a straight line. Ok...I'll be accountable for my actions and admit that I was speeding, but come on...he can't even drop it down? NOPE. Got the full price 10+ over the speed limit ticket...ON MY BIRTHDAY!

After he left I thought I should have thrown the pregnancy card at him and told him I was trying to get to the next rest stop (25 miles away) because I had to use the bathroom...oh well.

THEN...I get to Rock Springs a little after 7:30 pm. Kuso usually gets to his room around 7:30. I didn't see the work van, so I called his phone to make sure he wasn't in his room. No answer. I sit. I call back 20 minutes later. No answer. I sit. I proceed to call his phone every 10 minutes for the next hour and 20 minutes. FINALLY at 9:05 pm he calls. They had just got off work. By this time I was steaming mad. I was SO irritated. He gets back to the hotel at 9:25ish. (I couldn't go relax in the room because we were going to use his work assigned room, so I didn't have a key.) I had been sitting in my car an additional 2 hours after I had made the drive from Salt Lake....on my birthday.

Anyway, he finally gets a chance to explain that he didn't call to let me know they were working late because he can't take his phone in the plant with them, and they didn't even take a break. They just kept working. So I start to simmer down. We were supposed to go out to dinner to celebrate my birthday. I look into his eyes and the poor guy is so exhausted his eyes are bloodshot red. I had brought him a plate of food so I told him to just take a shower and eat that while I went to Burger King drive thru. To top it all...the food was old and chewy. Gross. So, yeah, it was a fun birthday.

Then Saturday we "celebrated" our anniversary by going to eat at the fine dining establishment of Golden Corral. We were going to take in a movie, but again, he was so wiped out, it wasn't worth it. I think we will put more emphasis on celebrating our "temple anniversary" than our civil anniversary...it's in August when he isn't so busy!

Despite all the "hiccups" over the weekend, it was worth it to be able to spend a few hours together.
Posted by Lisa & Aukuso 2 comments:

Happy Birthday to Me! I'm officially 29 and holding...okay, not holding. I'm not worried about getting older. In fact, I'm excited. Age brings so many opportunities that wouldn't come if we just stayed 29 forever.

Not a lot of big plans, but I'll be heading to Rock Springs, Wyoming after work. Kuso is working there...12 hour days, 7 days a week until the job is done. He's been there for a couple weeks, and will be there for a couple more without coming home at all. SO...I take advantage of being "free" and go visit him on the weekends. Although it's not the most exciting trip, I've succumbed to the fact that I will be spending Mother's Day, my Birthday, and our Anniversary in Wyoming every year! It's not where one is at, but who one is with that makes an occasion special...

Thanks for all the birthday wishes!
Posted by Lisa & Aukuso No comments:

So Leila's due date is exactly 4 months from today! We could be practicing parents in 4 months (give or take a few days). I'm super excited to meet our little girl.

Sometimes it all seems so far away and almost unreal. Then other moments the reality of the situation comes to light and all my emotions of fear and excitement come rushing back. People look at me funny when I tell them I'm scared or nervous. I am. But I'm WAY MORE excited than any of the nervous feelings that come up.

I can't wait to bring our firstborn home and begin that large chapter of our life.
Posted by Lisa & Aukuso 5 comments:
Newer Posts Older Posts Home
Subscribe to: Posts (Atom)