Before I forget - Sinave's 2+ month stats

I've been off work since the little guy was born.  I returned to work on Tuesday May 28th.  Rough day.  Anyway, Sinave had his two month check up on May 8th.  At that time he was 13.9 lbs and 24 1/2 inches.  Since I'm writing this about 3 weeks later, I'm pretty sure he is easily 15+ pounds now.  The kid does not stop eating. 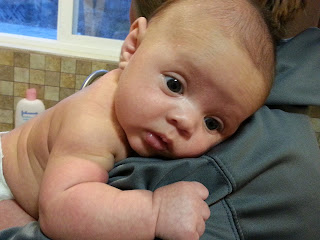 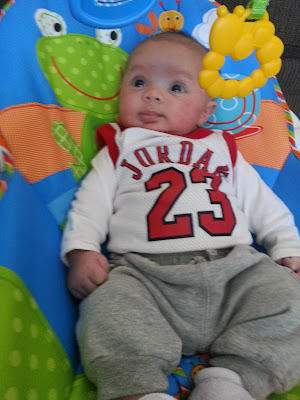 To date these are a few things about our baby boy:  (he is ALMOST 3 months)
*Wears 3-6 months clothes and has since his 2 month date - many fit perfectly - many are looking tightish - many are excessively long (he has a long torso and short legs - just like his daddy and my dad!)
*Doesn't cry much - "coughs" to get attention - even when he wakes up in the night.
*BUT - if you don't respond to his coughs quickly he gets mad.  Quick.
*Eats non stop (or so it feels that way.)  Right now we fix a 4 oz bottle.  Drinks most of it, then finishes the rest 30-60 minutes later.  An hour or two after that, he wants more again. And he only likes one style of bottle.  If you give him a different style, he gives you an "are you crazy?" look and more or less refuses to eat.  He also does NOT like a binki - but on occasion he'll take one....hence, the excessive eating!
*Has an internal timer.  Seriously.  When he wakes up in the night, he is up, fed, and back asleep in 30 minutes or less.  He will be wide awake and wiggly, making you think you are going to be up for a while, but when the time is almost up he settles in and zonks out.  He lets you know when it's around 8pm because that is bath time.
*LOVES bathtime.
*Smiles a lot.  Not big wide-open mouth baby smiles, but stinkin' adorable little grins.  He is so dang handsome the girls are gonna melt!
*Enjoys the bouncy seat - on his terms. He can reach the dangling toys on the one at grandma's house.  Not the one at our house yet. When he is digging the chair, he'll sit in for up to 2 hours - usually 30-45 minutes is typical.
*Loves to be sitting up.  Will lay down and play if someone is sitting near him.  He just likes to be involved in life.
*SO mellow.  (except for when you ignore his coughs.)  I get lots of compliments about how mellow he is.
*Goes to bed between 8:30 and 10:00 and usually wakes up once or twice before he is up for the day.  Usually around 2:30 to 4:00 or so.
*LOVES to snuggle.
*Wears size 2 diapers.
*Has the most adorable wide open eyes.  I get lots of compliments on his eyes.  Also lots of comments about how aware he is.
*Has a funny white birthmark on his left thigh.  My cousin's wife commented that he can tell his friends that's what his mom gave him.  :)
*The kid is strong.  He has tremendous head/neck control and has since day 1.  He can hold most of his weight on his legs and has the most proud look on his face when he does that, then collapses and lets me hold him again.

Sinave is so ridiculously super sweet that none of us can get enough of him. I'm TRYING to figure out how to get some pictures from my phone to this post.  IF you see pictures, I figured it out. IF you don't, I'll have to download them some how and post pics later.
Enjoy! 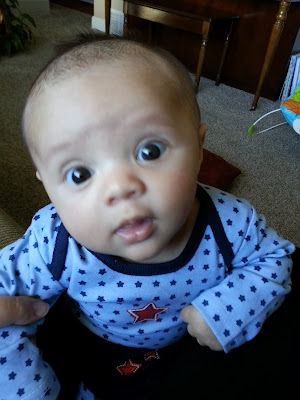