Almost every day, we went to the church so Kuso could play volleyball. I actually enjoyed going because Leila could run around and play with other kids. Also, the way their church was designed, where I sat offered a slight breeze and it was so refreshing. You can't see it from this picture, but the back part of the church has 2 levels. If I sat right next to the railing, on the volleyball court side, there was a nice breeze, plus I could see where Leila was playing and see the volleyball. We seriously went to the church for volleyball nearly every day we were there. 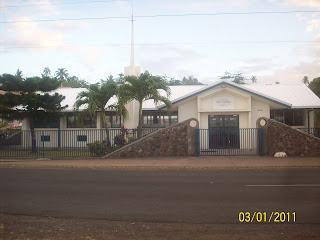 Every LDS church in Samoa is white, with blue trim. Very classy looking. 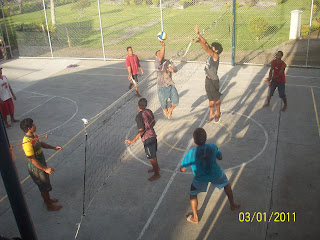 This is the volleyball/basketball court. Just to the side of the chapel. It is concrete, but much nicer than anywhere else they have to play. On Monday's, this is overrun with missionary's for their Prep-Day. It was fun(ny) to see the white Elders from the states put their gym clothes on because then their tan lines from their white shirts were VERY prominent. 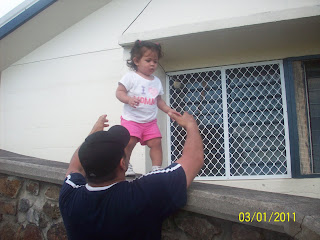 This wall leads up to the gates of the volleyball court. Behind it is the chapel. Leila thought it was really fun to walk up and down this wall. It freaked me out a little, but Kuso kept a close watch. 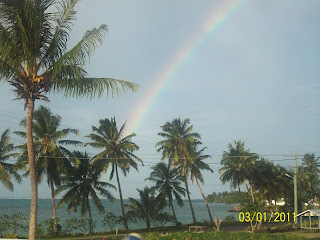 I took this picture from my second floor perch. This is looking away from the chapel, toward Kuso's house (well, the road leading to Kuso's house.) I just thought it was pretty with the coconut trees, the ocean, and the rainbow. 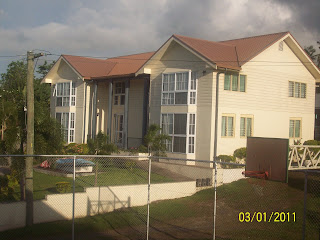 This is Kuso's auntie/uncles house. It is considered a nice house here, but for over there, man, this thing is NICE. I would love to see the inside, but it is just nice. Everyone always comments about how nice this house is. It is right next to the volleyball court. 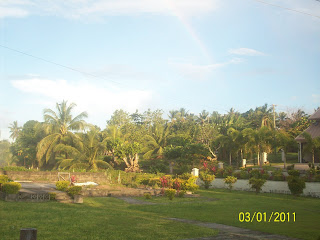 This is the yard to that nice house. 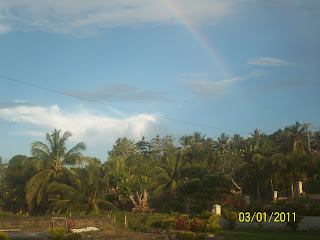 This is the yard between that last picture and right in front of that nice house. You can kind of see the rainbow in this shot too. Kuso's house is basically straight behind those trees. If you were to walk right in the middle of this picture and go straight, you would be at his house (mostly.) 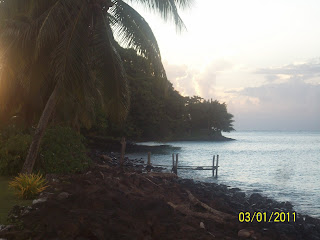 These two pictures were taken directly across the street from the chapel. I took about 4 steps off the side of the road to take these pictures. Plus the sun was starting to set, so the lighting makes it that much prettier. 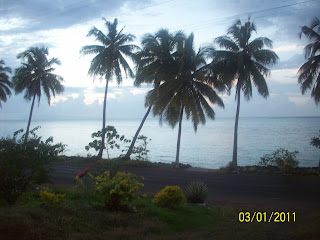 All of these flower pictures were taken at Kuso's uncles (?) house that lives right next to the street, right down the small road from Kuso's house. These are all wild plants that just grow there. Awesome. 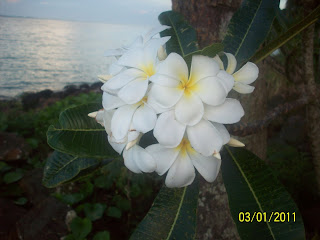 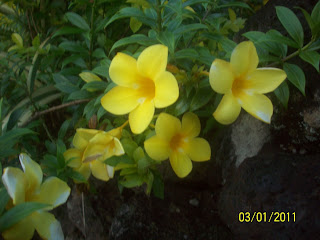 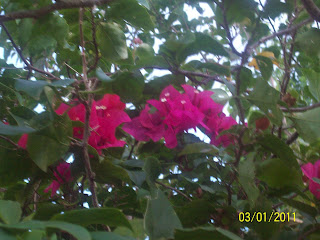 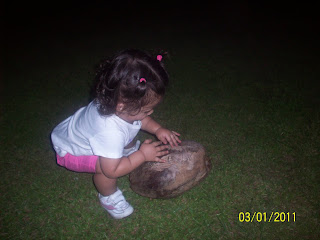 Kuso got this coconut from the trees along the shoreline. Basically, the trees directly in front of your family property are your family's. So anyone from that property can get the coconuts. But if you go down the street where it's not your property anymore, you should not be getting any coconuts from the trees. This coconut was brought down by throwing rocks. That kind of amazes me because when I picked that one off the small tree in front of the house, it was kind of hard to get off. So just by throwing rocks and having this coconut fall was awesome. (speaking of throwing rocks...one of the first nights we were there, Kuso and his brothers ate a bat. YES. A bat! They just kill it with a sling shot. I'm not sure if that one had been in the freezer, or if it was fresh, but he showed it to me and that was way too much...gross, but true.)
Also, most people don't know that coconuts come in a shell that has to be taken off before you get to the actual coconut that we all know. And yes, there is still another shell (the furry one) that you have to get through to get the fruit and/or milk. These things are pretty big.
Posted by Lisa & Aukuso

I am loving these posts! It looks/sounds like you guys had a great time! I can't wait to read about the rest of the trip!

Looks like you guys had lots of fun!! The pics are so beautiful and I'm jealous that you were by the beach!! Luckily in June I get to go to Miami with my 2 girls!! I bet Leila loved it!!