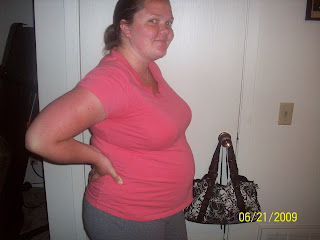 Here ya go...this pic was taken at 28 weeks and 1 day. I can look bigger if I push my stomach out, but there is plenty of time for that! The awesome burn and sun glass lines were from the "Fun in the Sun" at Youth Conference.

I'm still feeling quite well. I quit wearing my wedding ring as my fingers get too fat by the end of the day. My feet and ankles get quite swollen if I sit or stand for too long...or just don't chillax enough. Otherwise, I can't complain.

We are definitely getting more excited and apprehensive as the day approaches. It's a daily occurrence that Kuso asks "How's Leila?" Her presence is becoming more real and I've started thinking stuff like "in 3 months from now when we do this, we are going to have to take...." It's a bit of reality check, but we are getting more and more ready as time passes.
Posted by Lisa & Aukuso 2 comments:

Friday and Saturday were Youth Conference. We left Friday morning and headed out to Ephraim. We stayed in the dorms at Snow College (scary.) The girls side was full, so Jenie (our YW President) and I had to stay in the boys hallway. It actually ended up being a blessing since we heard several of the girls were up until 3am or later!
Friday after lunch, it was "Fun in the Sun" day. Luckily for us, it was actually sunny. Non-stop rain for the past 2 weeks left us all a little skeptical, but Friday turned out to be a great day. It was a field full of water activities...slip and slides, balloon toss, tug-o-war, crab soccer, etc all involving water. Due to my deformed body, I had the pleasure of watching it all. But none the less, it was still quite entertaining.
I had to choose between a sunburn and mosquito bites. As we noticed we were getting a little pink, we moved into the shade, only to be attacked by mosquitoes. I chose the sun. At least when the burn goes away, there will be some color left. When the bites go away, I'll be left with nothing (if not an awesome scab scar from scratching!!!) 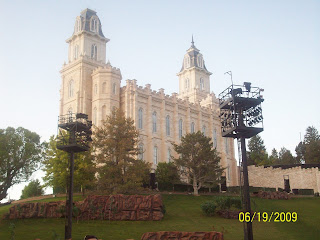 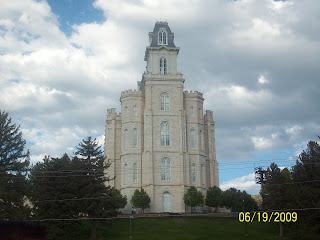 Friday night we went into Manti to watch the Mormon Miracle Pageant. It's an amazing performance. Last time I saw it, I was probably 7 or so. We went with our Young Adult group around 2002, but when we got there, it was rainy and crappy, so we left. So this is the first time I actually understood what was going on. It's a great tribute to the life of Joseph Smith and encompasses some of the stories from the Book of Mormon.
Utah has a unique connection to the Book of Mormon. Moroni actually knelt on the hill where the Manti Temple was built and dedicated the land for the building of a temple. Despite the outrageous rattlesnake problem (at the time...not so bad anymore...at least IN town), the land was established and came to be what it was dedicated for. Kind of cool.
Saturday we had some spiritual classes over at the Institute building. A brief testimony meeting followed. I love to hear the testimonies of the youth. Most of them are so sincere and it's amazing to watch them develop their own testimonies away from their parents. After the testimony meeting, we headed up to Spanish Fork to have lunch and games at a park. Then we were back home Saturday evening.
Although I came home EXTREMELY exhausted and with silly swollen feet/ankles, it was a great experience, and I'm glad I decided to go. Building relationships with the youth in our ward and stake is so beneficial in building my own testimony.
Posted by Lisa & Aukuso 1 comment:

This last weekend we went to St. George so Kuso and his cousins could dance at a wedding. Sorry. No pics because I was busy recording video! YEAH! We finally caught up with the rest of the world and have a video camera. Anyway...while they were performing, there were people sitting on the other end of the table from where I was. The one man said, "Wow. These guys are good!" The other man said, "They're the best I've ever seen." Those comments coming from people in attendance at a polynesian wedding mean a little more to me than people attending a palagi (white) wedding. No offense to any of my fellow palagi's...Later in the performance, the mother-in-law of one of the guys in the group leaned over and said "Your husband is REALLY good." Yeah...I'm pretty proud when the boys dance because I get to hear all the side comments about how well they do, especially Kuso.

While at the wedding, Kuso ran into one of his brother's childhood friends. Mandy invited us to her house later that night. We ended up staying until 2 am! It's so fun for me to visit with people that Kuso grew up with because I learn so much about him and his family.

I don't know why I like to think I can stay up and party like when I was in college. Friday night we didn't go to sleep until around 3 am and Saturday night it was nearly 2:30 am. We slept in late both days, but it's not the same kind of sleep. It will probably take me a few days to recoop!

LASTLY...Friday was the 3 month mark to Leila's due date! We are getting SO excited to meet our daughter. I've had dreams about what she looks like. I'm anxious to see if any of it is even close to what she will really be like. At the wedding, there were a TON of little girls, many of them afatasi (half/half) like what Leila will be. If she is as cute as some of the girls we saw, we won't be disappointed! The last few weeks Kuso has been able to see and feel her move. This is so exciting for him, and it makes me so happy to see the excitement on his face. Kuso uses her name more regularly, while I still feel wierd calling her "Leila." I still say "baby" or something like that.

It's been funny because in the pregnancy books and websites, it says that at this stage, poking the stomach likely won't simulate movement. But the other night, Kuso kept moving my stomach and saying "Leeeeeiiiiillllllaaaaa...." And then she would kick so strong. It was funny. Then he would do it again, and within seconds of him stopping the movement, she would start moving. Not just small movements. It felt like she was playing with him!

I'll post another picture soon, but I guess I'm really looking prego now, because people who don't even know me will ask when I'm due. Some may feel that these comments are inappropriate, but I'd rather look pregnant, than in that fat stage where no one dares say anything. And Kuso's cousins told me "you look really good in your pregnancy." They started talking about how big their wives were by the time they were as far along as I am now. I love nice comments.
Posted by Lisa & Aukuso 2 comments:

June 1st started Air Force appreciation week. The Bees game honored the men and women who serve in the Air Force. Since my dad works at Hill Air Force Base, he got us tickets for $5 each.
Before the game, there were sidewalk displays of cool vehicles
and stuff with Air Force insignia on it. 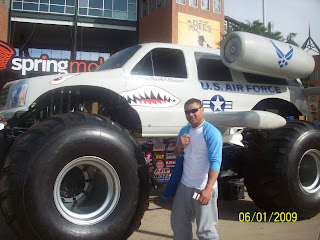 Two guys repelled off the side of the stadium. 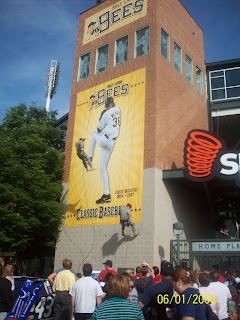 Before the gates opened, the Air Force Drill Team performed. They use fully functional rifles with bayonets on the end. They walk and flip their guns in different formations with "precision." 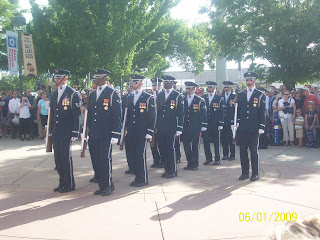 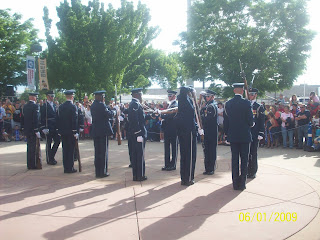 Kind of scary, but mostly amazing.

While inside the stadium, four parachuters entered the stadium carrying different flags. 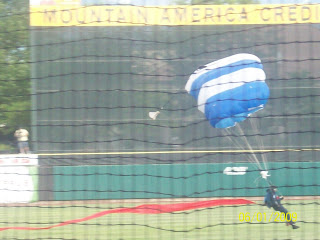 The 4th jumper carried the flag of the United States. It was gathered before it hit the ground and the four jumpers held it out in center field while the rest of the pregame stuff happened. 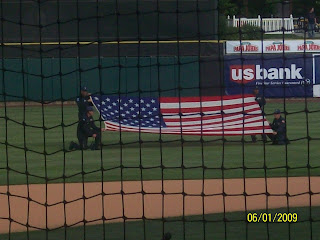 Right at the end of the National Anthem, these jets flew over the stadium.
It was pretty awesome. 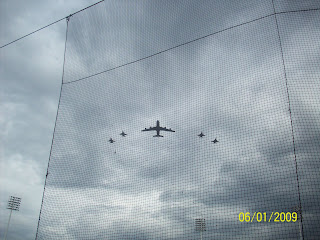 The weather started out nice, but then by about the 2nd inning, the rain came. It started a pretty good downpour and a lot of fans left. We were able to move up under a covered part of the stadium. The covered part along with our blankets kept us dry and warm enough to enjoy the game.
The Bees ended up winning the game 6-5. It turned out to be an exciting game and made it more enjoyable to be there.
NOTE: The following picture depicts a great idea for a Halloween Costume.
Devoted Sports Fan.
All it takes is your favorite outside sports clothing,
a garbage bag as a rain coat, a pizza box as a visor and a popcorn bucket as a hat.
Accessorize with your favorite beverage. 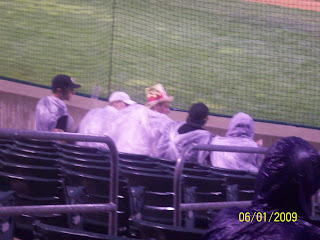 Posted by Lisa & Aukuso No comments:

Yesterday after church, Kuso and I went to take a nap. Leila was quite active so I had him lay with his hand across my stomach. He finally had the chance to feel her move! It was awesome. That was his first physical touch experience to know that she is alive! He's seen the ultrasound, and seen my body get bigger, but for him to actually feel the movement was great! Along with more movement has come other pregnancy related issues....stretch marks. The first faint ones showed themselves over the weekend...guess it's time to get serious about keeping my skin moisturized.

On a side note...he is hurt. He hurt his back on Memorial Day. He's not quite sure how. Probably just playing volleyball too long after not being able to play at that level for several months. Anyway, his back is just sore. Extremely sore. He moves like an old man getting in and out of the car. He walks around okay, but we know his back is hurting because he admits that he shouldn't play rugby or volleyball or work for at least a week or two...maybe longer. (For any of you that know him, that is AMAZING for him to give up his games and to miss work.) He worked about 3 days last week and said it was so painful it wasn't even worth going back. He found a guy who does the Samoan Style massages. He's hoping that with a few sessions of that, he will get feeling better much sooner!
Posted by Lisa & Aukuso No comments:
Newer Posts Older Posts Home
Subscribe to: Posts (Atom)