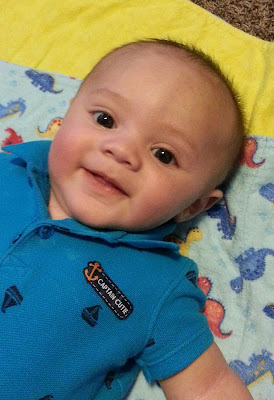 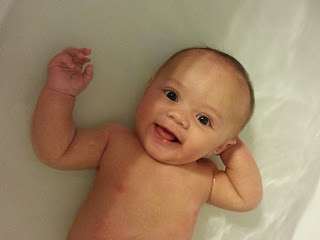 More about my sweet boy:
-Still super mellow, laid back, easy going - unless you don't feed him when he wants it.
-Gives smiles freely and easily  all. day. long.
-Sleeps 8+ hours most nights.  In a given week, he might wake up once or twice in the night.  Otherwise he goes to bed around 9:30 (ish) and typically wakes up between 5:30 and 7:30. If he's up before 7, he usually eats and goes back to sleep for an hour or more.
-I put 6-9 month pajamas on him this week.  They are not very big...everything fits quite well except the legs are a bit long.  He'll be wearing that size of clothes this weekend.  The 3-6 month stuff is quite snug and has been for a few weeks.
-Wear size 3 diapers
-Drinks a LOT of formula.  3-5 oz every 2-2.5 hours usually.
-Has become fascinated with watching everything Leila does.  If she walks into the room, his attention goes to her with a look of "awe" as he watches her.
-Very strong kid.
-Just this week started squealing/shreeking - not in a mad way, just in a loud way.
-His skin is still pretty light, but is getting a touch darker.  His hair is starting to grow in thicker (and it's dark!!!)
-His eyes are a dark, dark brown.  Leila's look almost golden next to his. I think his are darker than Kuso's.  Kuso says they are the same.
-SUPER ticklish, but won't really laugh.  Just tenses up and wiggles away, BUT when he does let out a laugh, it sounds like a grunt.  It makes me laugh.
-We haven't started rice cereal yet, mostly due to a busy week.  But it's on the agend this weekend.  Watching how he drinks his bottles and uses his tongue, I THINK he'll receive it well.
-Mommy went back to work right before he turned 3 months.  He goes to Nani Aiono's house (Kuso's cousins daughter.)  She is in love with him.  Always tells me what a good baby he is.
-His cousins almost fight over who gets to hold him when we are around the extended family.
-He LOVES bath time.  I recently started bathing him in the big bath tub.  I just let him lay and wiggle in the water for almost 20 minutes.  He loves it.  He splashes and gets water in his face, shows his huge grin, then does it some more.

I can't really put into words what an amazing child he is.  I always get compliments on how HAPPY he is.  He truly is.  He only cries when he doesn't eat right on demand.  He is happy in his car seat.  Happy on the floor (as long as he is getting attention.)  Happy playing and being held.  Sometimes all he wants is to be outside, laying on a blanket.
I ALWAYS get compliments about how handsome he is (and how handsome he is going to be when he gets older.)  I get mixed reviews on who he looks like more, mom or dad.  He has shown signs of looking like my younger brother Shawn, sometimes when he sleeps he looks a touch like my niece Kiley.  Some people say he looks like me (I think it's the cheeks.)  Some say he is daddy's twin.  He kind of looks like Kuso's nephew Nicholas, or Dallin.  But when you compare baby pictures, his and Leila's are kind of hard to tell the difference.  Well, whoever he looks like, I agree, he is handsome.

Our Heavenly Father sure knew what he was doing when this blessed child was sent to our family. 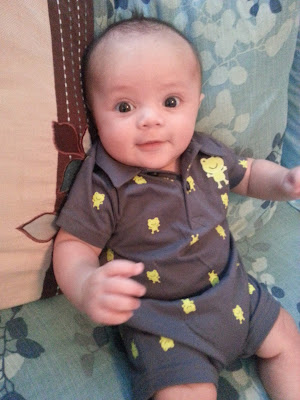 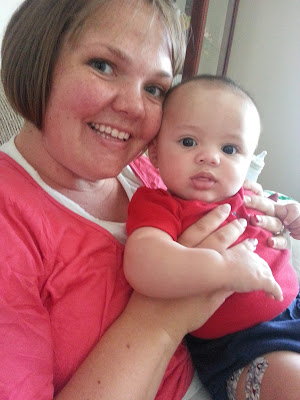 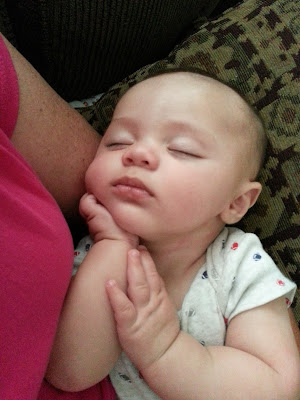 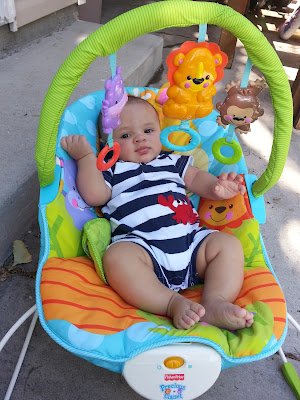