Sunday evening, we went with my parents to take Leila to the "Zoo Lights" at Hogle Zoo. I guess I thought there would be more actual animals on display, but the light displays were pretty awesome. Probably more fun for maybe a 4 year old who could see the animal designs in the lights, but it was fun...not too cold and no wind or snow or rain.

The good thing about the winter evening was we were able to see the TIGER and the SNOW LEOPARD very close. The leopard actually put its feet up on the window and was licking at some kids. The tiger just stared at us, but it was pretty close. Pretty awesome. The only other animals to be seen were in the reptile building yuck. Just the night before I has woke up in the night and talked with Kuso about my "bad dream" of a huge snake...Double Yuck. 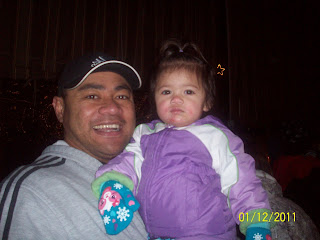 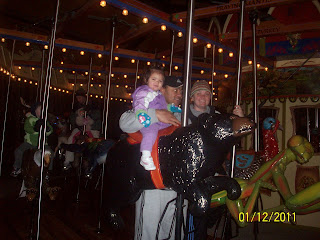 We took Leila on the carousel...she mostly liked it. Didn't show much emotion on her face, but she had fun. We would say to her "hands up!" and she would throw them in the air which made it look like she was having fun...

At 15 months, Leila is acting so old! She is finally done with her bottle (going on 5+ days now). She gave up her binky at about 7-ish months...and has never really had a blanket or an animal she is attached to...so for now, she lives life as it comes. We don't have to make sure to have any particular object with us. So nice.

She is a dancing machine...seriously...this girl has got MOVES! If you spend very much time with her, you will see her "shake it" which involves her pulling her elbows up and shaking her hips in a twisting motion...then she pushes her hip to the side and kind of shakes it a little. Then she crouches down and stomps her foot and claps her hands...sometimes walking while she does that. Then other times she twirls in a circle. She is HILARIOUS to watch.

She is starting to use/mimic small words. "Hi" "Mau" = more, "tank" = thank you, "mom mom" - any person she sees...then when you tell her who it really is, she just laughs. and the ever loving "NO!" used in various tones for various reasons...sometimes even includes a head shake with it.

She does not like to be left with other people. She is a TOTAL DADDY'S GIRL. If not daddy, then grandpa...if not grandpa, then grandma...if not grandma, then MAYBE mom if there is no one else there. It's kind of a nice break, but sometimes I just want my little girl to love me back!

She is STARTING to sleep better. Lately we go lay on the bed in the dark with her. (she has not used her crib in at least 2 months...she has been sleeping on the guest bed.) The past few nights she tries to get up a couple of times and I grab her, lay her back down, and just don't talk to her. Usually within about 10-15 minutes, she is fast asleep, and most nights, sleeps through the night. IF she wakes up in the nights, one of us just goes in to lay with her. Kuso usually sleeps the rest of the night with her because he doesn't wake up...I'm often back in my own bed within 5 minutes or less.