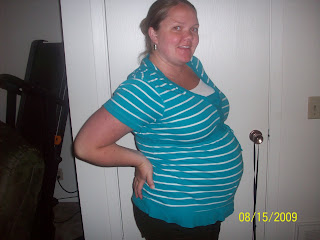 Here is the highly anticipated 36+ weeks picture. I'm almost 38 weeks now, so stay tuned for a new picture in a few days....

My first shower was thrown by friends in my ward on Thursday August 13th. We had it in the backyard of Carrie's house. They had a Hawaiian theme with decorations and Hawaiian Haystacks to eat. That is the first time I've had those, and they were so good. There was a downpour rainstorm about 10 minutes before the shower was supposed to start, then it turned in to a very nice, calm evening.
The next shower was on Saturday August 15th in my mom's backyard thrown by a few good friends, practically sisters. My mom had been planning and worrying for months how she would keep me cool in the middle of August in the backyard. Well, all morning long were horrible thunder storms. My mom found out that the church was available. About an hour before it was supposed to start, we decided to keep it in the backyard. We put up a shade cover over the gift table, and my mom's patio is covered over. We decided to stand up to Mother Nature who was throwing a shower of her own. By the time the shower time rolled around, it was a steamy 58 degrees. By the end of the shower, it was in the upper 70's. It turned out to be quite mild and nice to sit and chat. My mom's worrying about keeping me cool was unwarranted.

I got to plan the menu which consisted of chicken salad sandwhiches and fruit. That's all I wanted. They threw in chips, this YUMMY drink (sprite, peach crystal light, and frozen berries), and guava cake...mmmm. My girl Kim made this fruit flower arrangment. She watched a tutorial on You Tube. This was her first attempt. Looked pretty good! Tasted GREAT! She is so talented. 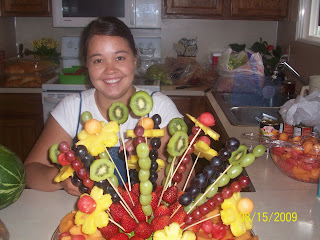 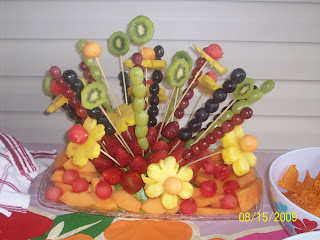 She thought it looked better on the table than with her posing with it, so here is the second look.

My last shower was on Thursday August 20th thrown by my co-workers. We all met at Sizzler for lunch.

After each shower, I brought stuff home and just put it on the floor in Leila's room. Over the week, it stacked up. These are the piles and laundry baskets full of all the awesome stuff we got! The bottom picture is the stack of diapers that we got from showers. Since these pictures were taken, we have received several more gifts and packages of diapers. 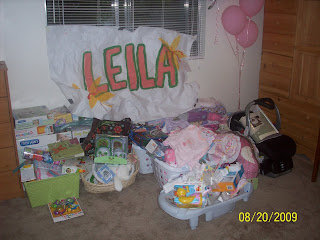 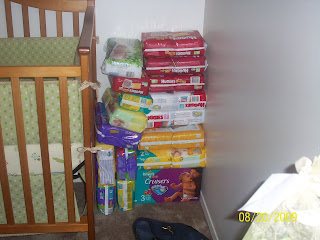 Needless to say, I don't think our daughter will go without much in her life. Too many people that love her and are excited for her to get here are willing to provide anything and everything she would ever want!

Looks like you're set! You can never have too many diapers :)