This was our first New Year's with a child. We started the night eating dinner with my parents and older brother. Then we left Leila with the family while we went to the Sauniatu Ward dance. This is the Samoan Ward Kuso used to attend with his sister before we got married. Our good friends, Burton and Leslie Uta'i and their son, Matai, joined us for the evening.

We left the Sauniatu dance at around 11 and went to the Aiono Family Dance. Kuso's cousin Wally put together a dance at his church for the family to get together, have fun, and ring in the new year together. My parents and Troy met us there and brought Leila. Several of Kuso's friends/family had not seen Leila yet, so we were excited to have her come.

Leila is a party animal. She took a little over an hour nap. I took her out of her car seat just after 11. She stayed up dancing and playing with us until after midnight. She definitely does not like to miss out on a fun time. 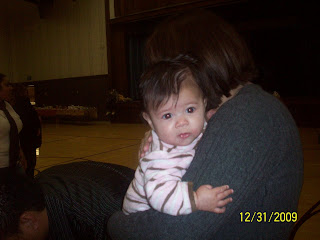 Leila with Auntie Leslie...she is still trying to figure out why she is in her pajamas, but at a party. 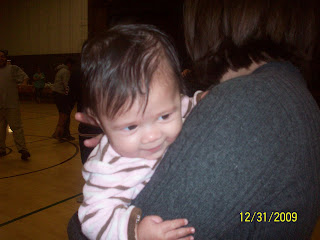 She looks a little mischievous. 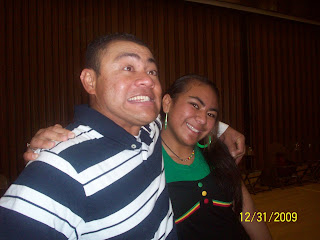 Kuso and his niece Leone. Kuso used to take care of Leone a lot when she was a baby back in Samoa. He kind of thinks of her more as a daughter at times. Isn't she a doll? 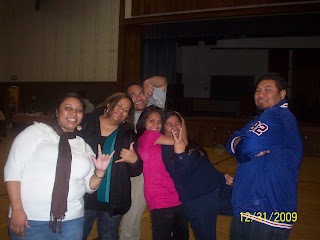 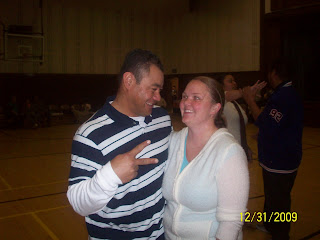 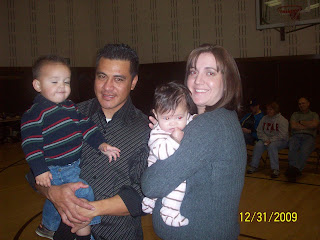 Matai, Burton, Leila, and Leslie. Matai LOVES Leila. He always wants to hug her and asks "What's that?" pointing at her. When she gets sad, he gets sad and tries to think of ways to make her happy. He will be a great older brother. I'm glad Leila has him as a "cousin" to protect her. when the boys come knockin...he will knock em out! 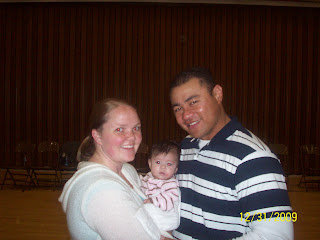 Our first dance as a family.
After ringing in the NEW YEAR, my parents, Troy, Kuso, Leila, and I headed to Dee's for our annual early morning breakfast. We had the same waitress as last year! After eating, we all headed back to my parents to spend the night. This was actually Kuso's idea because he knew he would be getting up early to go play ball. My parents live closer to the chapel he plays at and he also doesn't like to leave me alone....not because I can't handle it, but because he doesn't want me to be bored if he is gone very long.
All in all, it was a fun night. Here's to hoping for a great 2010!
Posted by Lisa & Aukuso

Oh my! Your little girl is adorable! I can not get over all that hair.