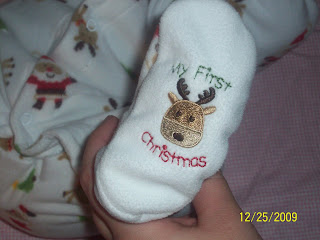 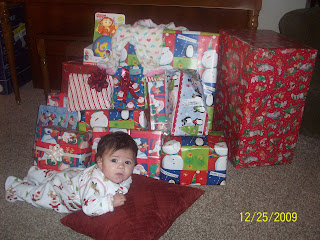 This is the STACK of presents a 3 month old got for Christmas. Plus, she had 4 more presents at our house! Starting in 1995, my family started opening presents after midnight on Christmas Eve. Long story short, our Christmas was stolen by some neighbors, we were all awake at 2am because of it, so we decided to open our presents. Since then, we have kept with the tradition. Makes for a great Christmas morning when you can sleep in rather than wake up early for Santa Claus! Anyway, this year Shawn, Michelle, and Kiley were able to come. Troy was also home, so we had my whole family together. With Kiley and Leila, it's hard to keep them up to open presents at midnight, so the adults opened presents at midnight and separated the kids presents out as we went. Then we stacked them up for the morning when they were awake. It was awesome because it felt like Christmas twice. This way, we also get to focus on what the kids are getting and can also spend time appreciating what we got. If it's up to me, we will continue to do things this way. As our kids get older and understand Christmas more, they can start staying up until midnight, open the tree presents, then go to sleep and Santa can come. If I were still a kid, I think that would be awesome. 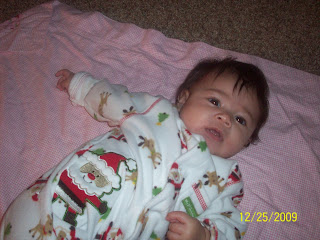 Kuso bought her these pajamas. They are "my first Christmas." He bought the size bigger than what she is wearing, but they weren't way huge on her. I was teasing him that he bought them because the Santa Clause is brown! 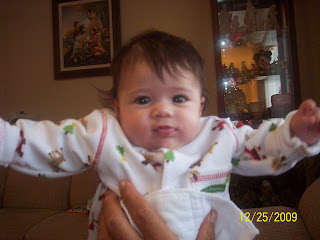 I included this picture because she is starting to get a little curl in the bottom of her hair, especially after she has slept and been sweaty. It's super cute. 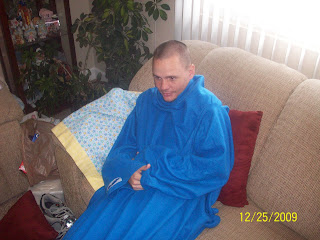 I told Shawn that I would be posting this "old man" picture. Troy bought my dad a Snuggie as a joke. Kind of. My dad is always wrapped up in a blanket like an old man, so it will actually probably be very useful. Anyway, Shawn and his Southern California blood was cold, so he started using it as it was the closest blanket at the time.
THEN, they decided to share. Notice the shared mug of hot chocolate as well.... 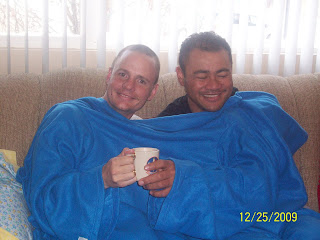 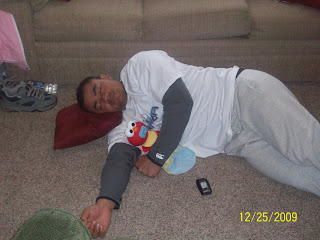 We were a TIRED bunch of people. That's Kiley's baby Elmo sleeping with Uncle Gus. Cute. 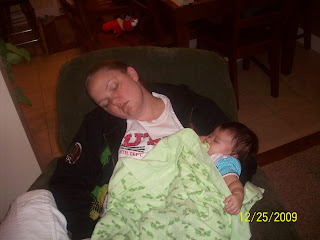 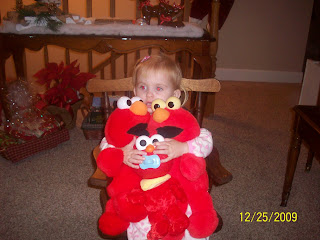 Kiley had an ELMO Christmas. Tickle-me-Elmo, Baby Elmo, Elmo Books, Elmo Movies. She LOVED it. I had Tickle-Me-Elmo, Elmo sings the ABC's, and Elmo sings the Sesame Street Theme when I was in high school. She found those in addition to what she got for Christmas. She was in heaven. This is the Elmo family. Tickle-Me old and Tickle-Me new with Baby Elmo. 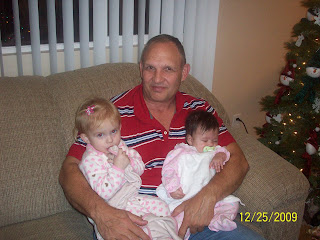 Grandpa and his girls.
Christmas was awesome. It was fun to have both of my brothers, Shawn's family, and my parents all home at the same time. That hasn't happened for well over a year...closer to 2 or 3 since we were ALL together at my parents house.
It's always fun to get presents and try and surprise those that you love, but it's more important to spend the season with people you love and care about. Nothing could be a better gift than spending time with those you love.

Merry Christmas, but not a single picture of 2 L, Neener, or Minnows